CycleRAP is an easy, affordable and fast method of evaluating bicycling infrastructure for safety. Developed by iRAP, CycleRAP is an evidence-based infrastructure risk evaluation model. It aims to reduce crashes and improve safety specifically for bicyclists and other light mobility users by identifying high risk locations without the need for crash data.

CycleRAP will power software tools used for pinpointing and mapping where crashes are likely to occur, and offer suggestions for treatments to reduce this risk. The model uses data about the features of a road, street or path to evaluate the risk of crashes for bicyclists and light mobility users—irrespective of the type of facility (or whether it is on or off road) and for all crash types. It can be used anywhere in the world. 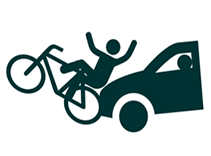 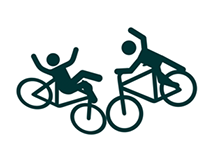 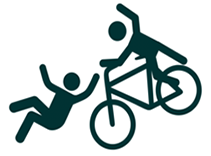 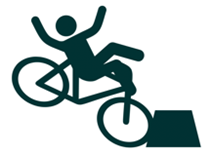 Crashes which do not involve others

CycleRAP is intended to be used to:

What problem is CycleRAP trying to solve?

The lack of data about bicycle crashes is a major challenge for road safety. Data is critical for understanding the nature of the problem and how to address it. Even for those with the most developed road crash data reporting systems, the quality of crash data for bicyclists and other users of light mobility remains poor.

Data for bicycle crashes which do not involve motor vehicles is a particular challenge. This is due to the simple fact that—even in cases of severe injuries—typically only ambulance services are called to attend to crash victims and no report or analysis for the cause of the crash is completed by traffic police.

n many places, the rate of fatal and serious injury (FSI) crashes involving bicyclists is increasing, often while the trend of overall FSI crashes is decreasing. For example, serious injuries in Sweden resulting from bicycle crashes has increased by approximately 35 percent over the past 10 years, while serious injuries for all other crash types fell. In the Netherlands, over 60 percent of approximately 80,000 bicycle crashes each year are categorised as serious.

“Cyclists are now the biggest challenge we have in achieving Vision Zero” – Anna Niska, VTI Sweden

This trend reflects the steep increases in the use of bicycles and other light mobility vehicles in cities across the world. Rapid changes in technologies (such as electric-powered vehicles), service providers (such as bicycle food delivery) and the sharing economy are contributing factors. In the United States, for example, the increase in shared micromobility alone more than doubled in a single year, from 35 million trips in 2017 to 84 million trips in 2018.

Monitoring, managing and addressing safety on facilities used by bicyclists and light mobility vehicles is a challenge, even for those with the most advanced bicycling networks. Specifications and manuals for road engineering and design for bicycling infrastructure, assessment tools such as road safety audit, and road asset management practices often neglect or ignore safe bicyclist infrastructure. CycleRAP aims to help fill this gap by providing a way to objectively measure and benchmark safety.

Who can use CycleRAP?

CycleRAP is intended for use by any transport authority or other organisation involved in addressing or advocating for safer facilities for bicyclists and users of other light mobility vehicles.

Specific uses could be:

The CycleRAP model and data is expected to be of interest to a wide range of stakeholders, including:

How should CycleRAP be used?

A CycleRAP risk assessment can be done for any type of facility where bicyclists or light vehicle users are permitted. This includes bicycle paths and lanes, shared streets, bicycle boulevards and road lanes, sidewalks, recreational paths and bicycle highways. It is designed to identify where and how facilities can be made safer for bicyclists and light vehicle users.

CycleRAP uses data to evaluate risk based on the infrastructure characteristics that increase or decrease risk for users. While its primary purpose is not to evaluate network connectivity, cycling comfort or perceived safety, the results and data collected can be used and analysed in conjunction with other data to help cities improve the overall quality of their cycling networks.

CycleRAP should not be used for sections of the network where bicycle and light mobility vehicle use is prohibited. Examples include designated pedestrian only paths or areas (such as pedestrian-only shopping streets) or urban expressways where bicyclists and light vehicles are prohibited.

How does CycleRAP compare to Star Ratings?

CycleRAP can be used on its own or in conjunction with other road safety assessment tools, such as Star Rating assessments or road safety audit, to provide bicyclist and light mobility-specific analysis.

iRAP’s existing Star Rating bicyclist model is a very effective tool for identifying where facilities are present on the road network (including what type of facility it is and its suitability for the traffic conditions), where the risk of vehicle-bicycle conflict is high and how to address it (via the Safer Road Investment Plans).

The CycleRAP model offers a complementary method of safety analysis for routes and networks used by bicyclists and light mobility users. The model focuses specifically on the features of these facilities and the inherent risk they pose across a range of bicyclist and light mobility crash types, irrespective of the facility type (or whether it is part of the road network).

Where did CycleRAP come from?

CycleRAP originated in 2015 as a result of collaborative efforts by the International Road Assessment Programme (iRAP), the Royal Dutch Touring Club (ANWB), the Province of Friesland and the Dutch Institute for Road Safety Research (SWOV). In 2016-19, early versions of the model were piloted over more than 400km of bicycling facilities in the Netherlands.

In 2018, ANWB engaged iRAP to undertake an evaluation of the CycleRAP pilot trials and to complete a comprehensive literature review to strengthen the link between the model and available evidence.

The project was undertaken in three phases:

Where is CycleRAP now?

In 2020, iRAP (with support from ANWB) completed a detailed review of the CycleRAP model and the pilot project which concluded that a number of issues needed to be addressed.

Planning commenced for a second generation CycleRAP model, which aims to:

What’s the plan to get there?

The development plan for CycleRAP has three parts:

A CycleRAP Advisory Group has been established to help guide the development of the CycleRAP model to ensure it can effectively underpin potential CycleRAP tools and applications and ultimately meet end user needs.

Membership is by invite only and aims to represent a range of skills, experience and expertise from across the world, including:

The job of the Advisory Group is to:

The CycleRAP Advisory Group members, all of whom generously volunteered their time and effort to the CycleRAP project, are: