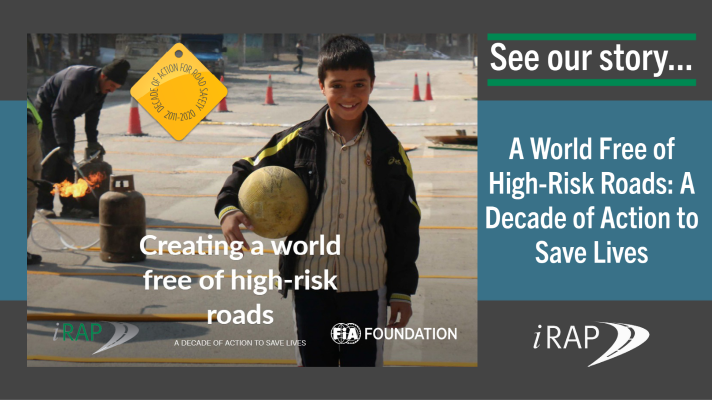 > Back to About us

The Road Assessment Programme (RAP) and the New Car Assessment Programme (NCAP) were both founded by the British, Dutch and Swedish governments working in partnership with leading European automobile clubs and safety charities.  Both the NCAP and RAP programmes have both been rolled out globally.

The European RAP programme was developed with funding from automobile clubs, national governments and a series of staged EU grants to create a “permanent institution”.  The focus, like NCAP, was to create a market for safety by raising consumer awareness.   By 2005, some 20 countries were applying or developing the safety ratings in Europe with programmes established in Australia, New Zealand and initiated in the USA that included both likelihood and severity outcomes.

Innovation has also continued with new investment in CycleRAP as part of an enhanced iRAP Urban application; enhanced crash data modules (ANRAM in Australia); Smart Motorways and Speed Management modules and more comprehensive benchmarking tools.  Design standards are being reviewed (e.g. UNESCAP and EBRD) to inform safer road design and the OECD has launched the Safe System report capturing the potential for 5-star roads and 5-star vehicles to shape the basis of safe system performance and progress towards zero deaths.

Thanks to all of our donors, partners and friends a lot has happened in the first 15 plus years of RAP and many lives have been saved.  Join us to continue the innovation and expansion of impact as we seek to save lives and create a world free of high-risk roads in the years ahead.

The relationship between star ratings and crash costs per distance travelled were researched and reported and the business case for safer roads developed to support calls for a UN Sustainable Development Goal for road safety. Innovative financing concepts associated with Impact Bonds were investigated to highlight the potential of a win-win investments in road safety.  Vaccines for Roads III was launched at the global World Free of High-Risk Roads event held in London in 2015 with Ministers, WHO, World Bank and leading development agencies present to share the potential of minimum 3-star standards for all road users.

The independent 3-star coalition was formed by the Fund for Global Health and a wide range of partners from around the world combined to lend their support to the call for 3-star or better roads for all road users.  Star Rating of Designs extended in application worldwide and the Qatar Government helped developed tools to make the process easier.  FedEx has supported the further development of the Star Rating for Schools tablet app to ensure a free, simple and scalable solution for NGO's and school communities to apply globally.

Further improvements to the models, software, training and quality assurance provisions were made over the next 3 years based on the feedback from partner countries.  By the end of 2012 programme activities extended to over 70 countries, with the risk on an estimated 500,000km assessed, iRAP receiving charitable status and global supplier networks being established.  The introduction of star rating for designs was also enabling new objective targets to be set to guide the safety performance of new roads.  Vaccines for Road II was launched summarising the progress from pilots to global programmes.

The new techniques assumed reliable crash data would not be available. They added innovative economic appraisal to generate safety investment programmes which would raise the safety rating and give the highest returns. The results from the pilot programmes were contained in the inaugural Vaccines for Roads report launched in 2009 at a global conference at EBRD.

iRAP was formed in 2006 and was granted charity status in 2011 (UK Registered Charity 1140257). The organisation forms the umbrella organization for road assessment programmes worldwide – e.g. Europe (EuroRAP), Australia (AusRAP), and the US (usRAP) and facilitates the development of road assessment work in low and middle income countries.

In 2006, following the suggestion of the World Bank, RAP techniques specifically tailored for use in low and middle income countries were developed using a €3m grant from the FIA Foundation. These were piloted in Chile, Costa Rica, Malaysia and South Africa.