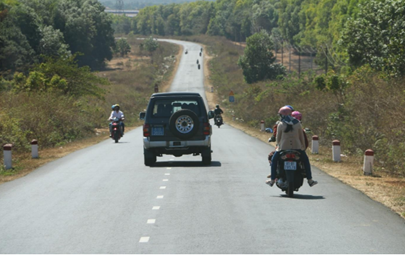 National Highway 19 (NH19) in Vietnam is a priority corridor that has received significant safety attention and iRAP and partner road safety assessments of proposed design upgrades have been completed in recent years.

The project has been instrumental in building capacity of local stakeholders to eliminate high-risk roads in Vietnam, in association with local partner Yooshin Engineering Corporation. As part of the project, iRAP training materials were translated into Vietnamese and 6 virtual trainings were delivered to 37 local engineers in Vietnamese.

iRAP was involved in undertaking a Star Rating assessment of the NH19 in 2017 as part of the Central Highlands Connectivity Improvement Project (CHCIP) involving the Government of Vietnam with World Bank support. CHCIP aimed to improve connectivity between the central coast port of Qui Nhon in Binh Dinh Province and neighbouring Cambodia via the central highlands region.

The improvement of road safety along the NH19 corridor was a key objective of the project with road infrastructure upgrades expected to play a major role in reducing the risk of death and serious injury along the route.

The assessment showed the existing road as relatively high risk for all road users and particularly for vulnerable road users. The results showed that 45% of the road was rated a ‘high-risk’ (1- or 2-star) for vehicle occupants; 66% for motorcyclists; 79% for pedestrians and 69% was rated only 1- or 2-stars for bicyclists.

The assessment at the time provided an investment plan indicating the potential to prevent almost 6,000 deaths and serious injuries on the corridor over a 20-year period with targeted road safety improvements to bring the corridor to a 3-star or better standard.

The proposed designs demonstrate a significant increase in the length of road, which will achieve 3-star or better. Further work is required, however, it is estimated these recent designs and upgrades will significantly reduce fatalities and serious injuries.

The Bloomberg Philanthropies Initiative for Global Road Safety (BIGRS) continues to have a focus in reducing fatalities and serious injuries from road traffic crashes in Vietnam and has supported an iRAP comparison of the Yooshin and FRED Engineering assessments of designs funded through the World Bank’s Global Road Safety Facility.