Cycling and walking for people and planet: New reports and PATH COP27 letter to governments and cities draw link 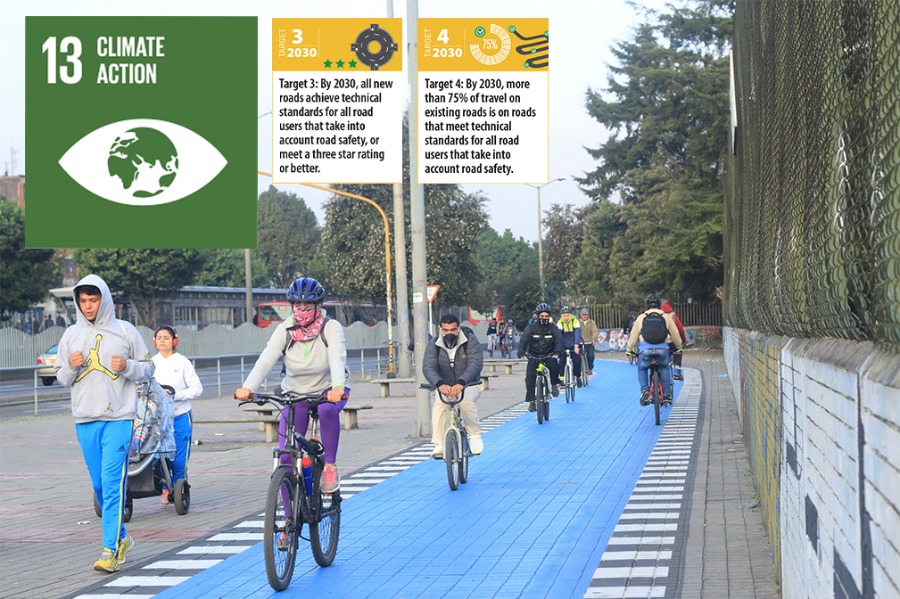 With Transport Day at COP27 this week, two recent reports of our major donor, the FIA Foundation, and global partners have highlighted the crucial links between safe cycling and walking infrastructure and reduced Greenhouse gas emissions, lower transport costs, and the prevention of road traffic fatalities and injuries compared to investment in other infrastructure. iRAP has also joined  more than 360 global stakeholders signing up to a new Partnership for Active Travel and Health (PATH) coalition calling on governments and cities to invest more in walking and cycling to achieve climate goals and improve people’s lives. 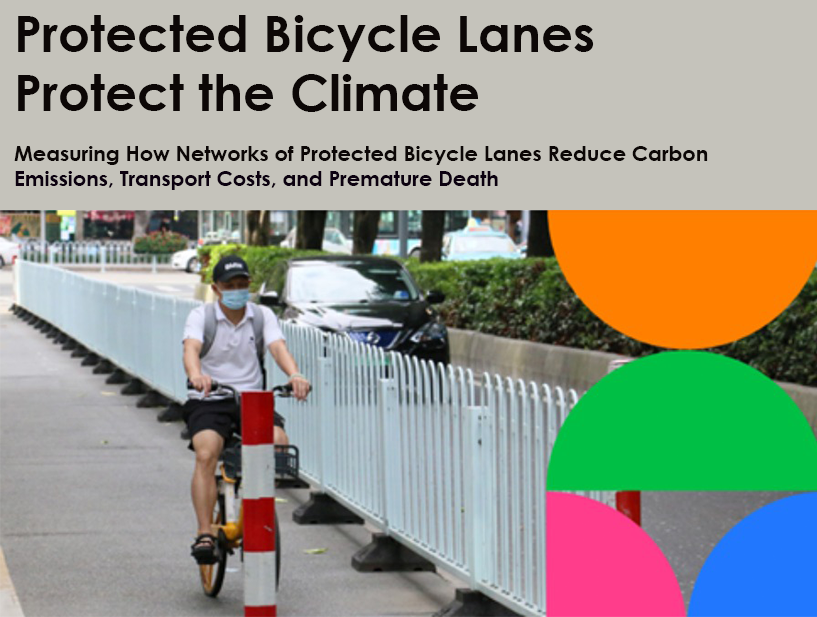 A new report Protected Bicycle Lanes Protect the Climate, developed by the Institute for Transportation and Development Policy’s (ITDP) global Cycling Cities campaign, supported by the FIA Foundation, finds that networks of protected bicycle lanes in middle-income cities are an extremely cost-effective way of reducing emissions; providing quantifiable economic benefits, and paying for themselves in less than a year.

These networks create more economic value annually than they cost to build, given the transportation cost savings and the public health benefits of increased exercise.

Protected bicycle lane networks outperform all other infrastructure developments, for example, metro rail systems, while an essential part of sustainable urban transportation, are outperformed by a factor of ten in terms of emissions reductions per dollar spent. For every 200 USD spent on highways, the report estimates, one tonne of GHG emissions per year will be created, while the same spend on protected bicycle lanes mitigates almost exactly the same level of GHG emissions.

The report is one of the first-ever empirical measures of GHG reductions from networks of protected bicycle lanes in low- and middle-income countries, specifically examining the impacts of the extensive networks that exist in the major cities of Bogotá, Colombia and Guangzhou, China. Using cyclist counts and intercept surveys, combined with lifecycle emission factors for various modes, this study estimates that these networks prevent the emission of about 22,000 tonnes of CO2-eq per year in Bogotá and 16,000 in Guangzhou. In each city, this is equivalent to the amount of carbon that would be sequestered by planting 300,000 to 400,000 new trees every year.

The lessons drawn from Bogotá and Guangzhou in this report demonstrate that networks of protected bicycle lanes should be considered essential — they can be built much more quickly and cost-effectively than rapid transit systems and implementation takes a few years or less, rather than decades. The most crucial action a city can take to promote cycling in particular is the construction of a network of protected bicycle lanes to establish cycling as safe, affordable, and accessible.

The findings of this research enable anyone to model the climate impacts that a bicycle lane network would have in their city. ITDP researchers have developed a free interactive modelling tool to predict the impact of any proposed bicycle lanes development, which is available to download here in Microsoft Excel or Google Sheets.

In addition, iRAP’s CycleRAP model can be an important companion to understand the safety impacts that the bicycle lane network would have.

New report: A truly sustainable mobility paradigm must include a large share of investment in walking and cycling 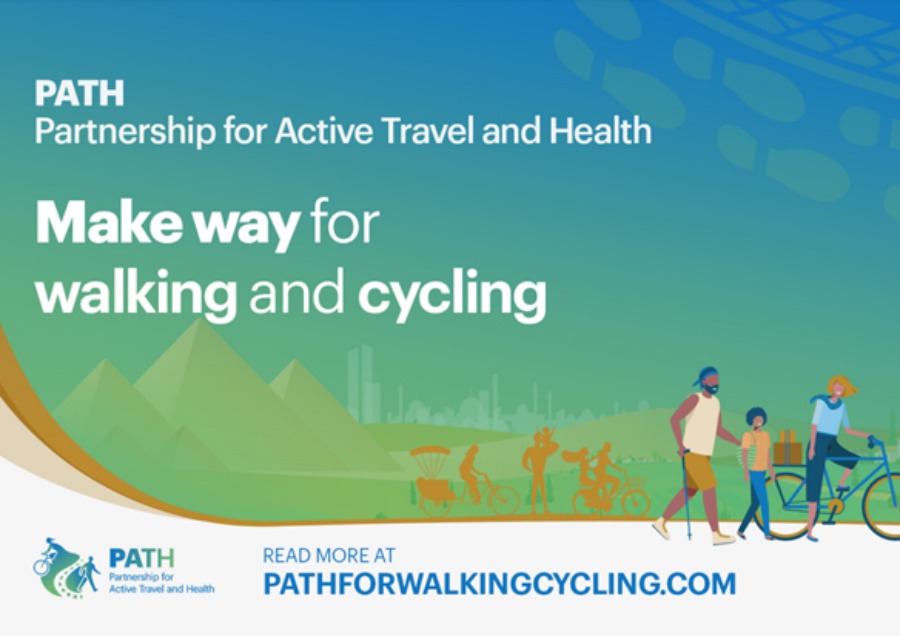 A second report Make Way for Walking and Cycling by a new global Partnership for Active Travel and Health (PATH) shows that enabling a significant share of urban trips to be walkable and cyclable will provide a quick, affordable and reliable way to significantly reduce transport emissions, traffic congestion and road casualties and at the same time deliver better public health, stronger economies and fairer societies. 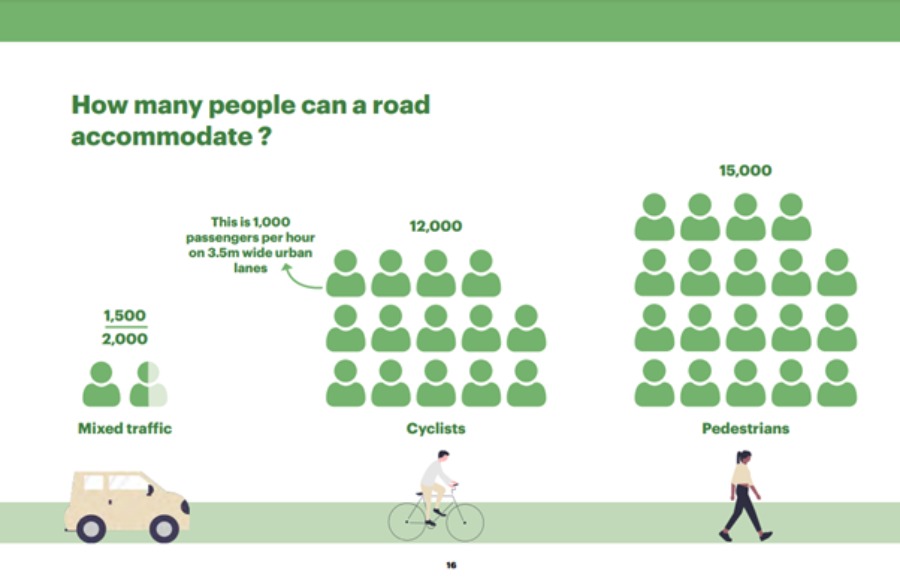 Effective support for walking and cycling in everyday life requires a set of integrated, coherent and funded actions for:

On the occasion of the COP27 climate conference, iRAP has joined the Partnership for Active Travel and Health, alongside supporters of more walking and cycling, in issuing a letter to governments and cities. We support the call on governments and cities to invest more in walking and cycling to achieve climate goals and improve people’s lives. See the letter, signatories and PATH partners HERE where you can also join the many organisations signed up ing support.

Around the world, cities urgently need to reduce emissions to address climate change, reduce the health and economic burden of road traffic injury, and improve quality-of-life for their people.

Placing walking and cycling at the very heart of global, national and local strategies is crucial and RAP Tools, including Star Rating for School, CycleRAP, iRAP’s Big Data Tool and the charity’s Training and Accreditation Programme provide important companions for evidence-based action.

iRAP’s CycleRAP model is an important companion to understand the safety impacts that a bicycle lane network would have in their city.  CycleRAP is an easy, affordable and fast method of evaluating road and bicycling infrastructure for safety. It aims to reduce crashes and improve safety specifically for bicyclists and other light mobility users by identifying high risk locations without the need for crash data. It can be used anywhere in the world and iRAP is looking for partners to pilot test the new CycleRAP model to measure and validate the safety Star Rating of their designs and infrastructure.

Star Rating for Schools (SR4S) is an evidence-based tool for measuring, managing and communicating the risk children are exposed to on a journey to school. It supports quick interventions that save lives and prevent serious injuries from day one. SR4S is already in use in 55 countries where it has star rated the safety of nearly 1,000 schools.

iRAP’s Training Programme which has supported the training of 54,000 people globally provides capacity building and accreditation in the use of RAP Tools to optimise bicycle and pedestrian safety.