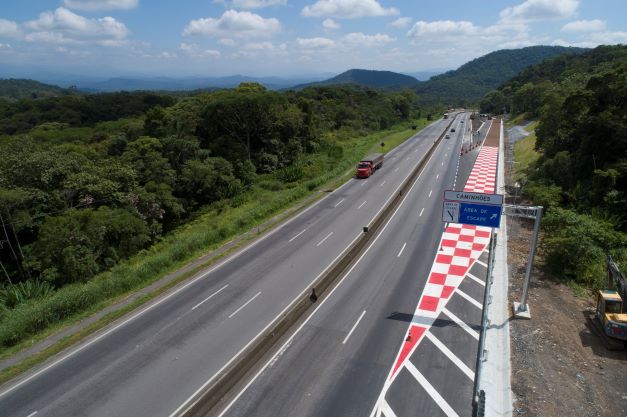 A new concept is being applied in Brazil and Paraná to improve road safety and reduce accidents and deaths: “forgiving highways”. The proposal is to minimize the impact of human error with the construction of escape areas, installation of safety barriers and vibration lines, among other interventions. In case a driver makes a mistake, they can count on the resources that the road offers to avoid the crash or, at least, minimize its consequences.

The practice started about 40 years ago and is already common in more advanced countries, but in Brazil the concept only arrived in 2018 – and the scenario is far from ideal, according to an analysis by the National Traffic Confederation (CNT). A study carried out by the entity shows that, in 2020, the costs of crashes on the country’s federal highways corresponded to R$ 10.2 billion (USD $1.94 billion), while investments to avoid them were of only R$ 6.7 billion (USD$1.27 billion).

In ten years, all highways granted by the PR will be 3 stars or better

This picture promises to change. In Paraná, effective actions within the concept of “forgiving highways” are already in the new concession contracts, which will take effect from 2022. “At the end of the first year of concession, all roads will have to be classified at least as ‘2 stars’ and, in ten years, they will have to go to at least ‘3 stars’,” says Marcello Costa, national secretary of land transport at the Ministry of Infrastructure.

From there, according to Secretary Costa, plans will be made to increase requirements to 4 and 5-stars. The rating ranges from 1 to 5 stars, according to road safety conditions following standards recognised by the United Nations (UN). “We brought the concept to Brazil and assumed it as a public policy,” says the secretary.

“Human error will happen and the highways have to forgive these mistakes, being equipped with audio, signalling and infrastructure devices that reduce the chances and severity of crashes,” he points out.

All work follows the iRAP methodology, developed internationally to inspect high-risk roads and reduce crashes. In the case of the Paraná highways, the first needs have already been identified and will be identified in the contracts. But, in addition, the concessionaires will undertake, in the first year of the concession, to carry out a more detailed diagnosis pointing out other demands.

“It will be an advance,” says João Arthur Mohr, manager of Strategic Affairs at the Federation of Industries of Paraná (Fiep). “Concessionaires will be forced to invest in safety within this ‘forgiving highways’ concept. Before, there was no such requirement,” he observes.

In addition to the highways granted, the Union will invest in federal highways that are not tolled and the expectation is that the states will also do the same. In Paraná, last month, the DER launched the public notice for the Road Safety Programme for State Highways (Proseg Paraná), which foresees an investment of R$ 70 million (USD$13.3 million) in safety along 10,000 kilometres.

According to Hugo Alexander Martins Pereira, specialist in traffic management and planning and professor at Universidade Positivo, the concept of “forgiving highways” has to be combined with road conditions and an education campaign. “The good practices and this methodology have shown good results in several countries,” he says.

Another expert on the subject, UFPR’s PhD professor in transport engineering, Jorge Tiago Bastos, classifies as very important road maintenance, paved shoulders and roadsides free from any obstacles, such as trees, poles, walls and slopes.

“This is more than an escape area, it’s a way for the driver to have enough space to safely regain control of the vehicle,” he says. According to him, this solution is foreseen, but it will not always be possible and, in this case, the areas of escape and safety barriers are also important.

Bastos says that the road conditions in the state and in the country are very different. “There are very safe stretches and others, not”, he observes. Bastos acknowledges that “many advances have taken place in recent years, but there is still a lot to be done.”

The current concession contracts for the Paraná Integration Ring, which comprises 2,500 kilometres, date from 1997 and expire in November of that year. When they were signed, there was still no mention of “forgiving highways”, but investments were made throughout the concession period, aiming at safety.

“Several actions that were not provided for in the contract were carried out, such as camera monitoring, for example,” says Thaís Caroline Borges, CEO of CCR RodoNorte. “The contract gives us a direction, but we cannot continue operating as we started,” he points out. She informs that on the stretches under Rodonorte’s responsibility (Curitiba to Apucarana and Ponta Grossa to Jaguariaíva), the crash rate was reduced by 73% and the death rate by 82% from the beginning of the concession until the end of 2020.

Ecovia says that the reduction of crashes on the stretches where it operates has been 55.8% since the beginning of the concession. Between 1998 and 2020, more than R$ 940 million (USD$178 million) (values ​​from 2020) were invested in improvement and maintenance, including safety devices and horizontal and vertical signalling. An exhaust area for trucks was also implemented at km 37 of the BR-277, which connects Curitiba to the coast.

Arteris, which administers three federal highway concessions with segments in operation in Paraná (Régis Bittencourt, Planalto Sul and Litoral Sul) advises that between 2010 and 2020, there was a reduction in deaths of 42.3% (Litoral Sul), 56% ( Régis Bittencourt) and 66% (South Plateau).

Protection and safety equipment such as concrete barriers, impact attenuators and two escape areas were installed, both on the BR-376, which connects Curitiba to the coast of Santa Catarina.

iRAP Note: iRAP congratulates the Parana Authority for this life-saving policy leadership. Paraná is an important state in Brazil, geographically around half of the size of Paraguay and with large investments in road infrastructure. There are more than 2,500km of concessions that commenced in 1997 and end in November this year.