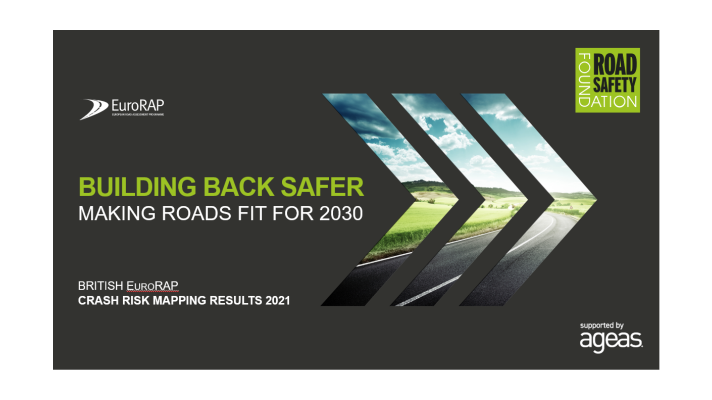 Tuesday 15 July 2021: During an online event to 200 International attendees, the Road Safety Foundation and Ageas Insurance released the report ‘Building Back Safer: Making roads fit for 2030’. 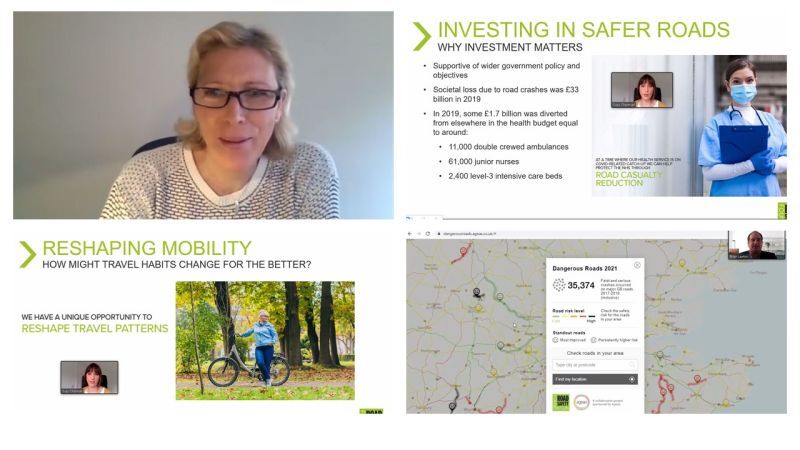 The Hon. Minister Charlotte Vere (Minister for Roads, Buses and Places) and Dr Suzy Charman (Executive Director of the Road Safety Foundation) provided great insights on the business case for safer road investment focussed on safer and sustainable modes of mobility and the benefits to the health system.

Now is the time to build back safer

The G7’s commitment to “Build Back a Better World” should start with a pledge to build back safer to tackle deaths and serious injuries on Britain’s roads.  A report, out today from the Road Safety Foundation and Ageas Insurance says that the pandemic has presented a unique chance to re-shape travel patterns and support healthier travel choices, which in turn will cut casualty numbers and help to achieve health, exercise, net-zero carbon and air quality goals.

Building Back Safer: Making roads fit for 2030 indicates that a safer road network is fundamentally in line with the government’s stated objectives: investment in infrastructure, skills and innovation; and levelling up every part of Great Britain. The report highlights ten per cent of motorways and “A” roads that are clear priorities for investment.

Building back safer advocates for safer road infrastructure that includes facilities for active travel – schemes that deliver high rates of return and support casualty reduction and Great Britain’s global leadership in the field of road safety.

The report points to the societal loss attributed to road crashes each year (£33 billion in 2019). In 2019, some £1.7 billion was diverted from elsewhere in the health budget; this sum is the equivalent of around 11,000 double-crewed ambulances, 61,000 junior nurses or 2,400 level-3 intensive care beds.

Building Back Safer summarises the levels of investment needed to tackle the 10% of each road network (strategic and local roads in England, Scotland and Wales) with the potential to prevent the greatest number of deaths and serious injuries per £1 spent over a 20-year period. It also shows the 10% of English local authority roads – by region – that would offer the best returns, so investment is spread across England.

Together it is estimated that these investment packages totalling £1.4 billion could prevent well over 11,000 fatal and serious injuries over the next 20 years with an average benefit-cost ratio of 3.7.

Some examples of high return routes are:

There are 26 routes that improved significantly from the first data period (2014-2016) to the next (2017-2019) – a road length of almost 500 kilometres. In the earlier three-year period, the ten most significantly improved routes had a risk of almost three times that in the later three-year period. The number of fatal and serious crashes on these routes fell by two-thirds from 557 to 187. The annual value of the crashes prevented was more than £50 million, or more than £110,000 per kilometre road length, with a Net Present Value of almost £800 million over 20 years.

Improvements are a range of measures: road markings and better junction layout; the introduction of lower speed limits at higher risk points; and better pedestrian and cyclist facilities. For example, highly visible vehicle-activated signs on the approach to Barford Corner near Barnard Castle, have contributed to an 85% reduction in fatal and serious crashes on this part of the A688.

The data from the report has been used to update the interactive ‘Dangerous Roads Map’ https://dangerousroads.ageas.co.uk/  This reveals Britain’s riskiest motorways and ‘A’ roads.

In the foreword to the report, Lord Whitty, Chair of the Road Safety Foundation says: “Ahead of us is a unique opportunity to re-shape the way we move – to plan for healthier mobility – redefining our neighbourhoods to support safer active travel. Such changes may help us to deliver lower casualty numbers in the future while also helping to achieve health, exercise, net zero carbon and air quality goals.

“This report identifies a high-return investment package of £733 million for local ‘A’ roads in England, with similar portfolios available in Scotland, Wales and on the Strategic Road Network in England.”

Commenting on the findings of the report Ageas CEO Ant Middle said; ““While the pandemic may have changed the way that we live and travel in the short term, it has not fundamentally changed the devastating impact of road crashes.

“Let’s not slip back to accepting the traditional causes of loss of life on our roads. Let’s take the opportunity to build a better transport infrastructure with investment focused on resolving the remaining risky roads used by thousands of people every day. Let’s build back safer.”

Building Back Safer: Making roads fit for 2030 is available here under embargo: https://downloads.roadsafetyfoundation.org/2021_Report/GB_EuroRAP_results_2021_Bulding_Back_Safer_Pre_release_version.pdf and the interactive map is here: https://dangerousroads.ageas.co.uk/

Ageas is one of the largest car and home insurers in the UK. They are part of an international group, which is headquartered in Brussels.

Millions of people around the world trust Ageas to protect them. They help motorists, households and businesses across the UK every day with a purpose to understand people and simplify insurance.

As the UK’s fifth largest private car insurer, Ageas knows only too well the impact that incidents on the roads can have on their customers, their families and friends, other road users and public services. That is why Ageas has partnered with the Road Safety Foundation since 2012 – helping to make Britain’s roads safer for everyone.

To find out more about Ageas Insurance visit ageas.co.uk or see the Dangerous Roads Map at https://dangerousroads.ageas.co.uk/

About the Road Safety Foundation (RSF)

The Road Safety Foundation (RSF) is a UK charity, founded in 1986, that aims to help reduce road trauma through employing the Safe System philosophy by:

Recently, the charity has:

For more information and our full library visit roadsafetyfoundation.org