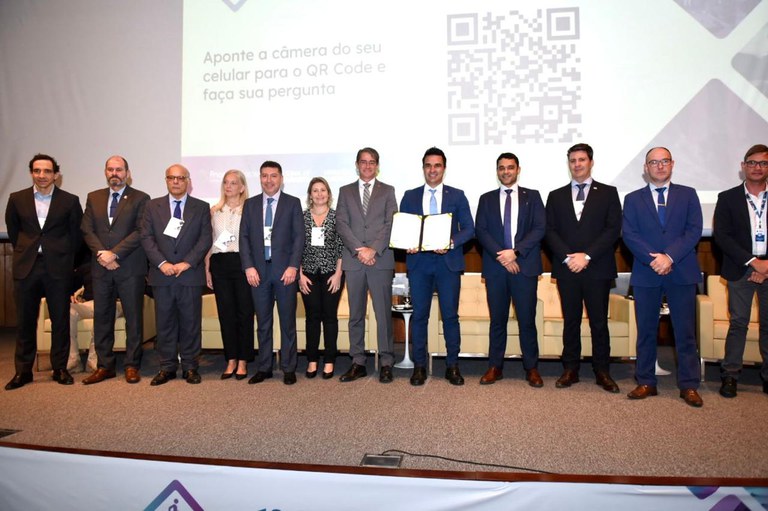 Republished with machine translation from https://www.gov.br/

The Federal Government of Brazil has instituted a landmark Five Year Permanent Agenda for Road Safety which aims to promote actions and public policies to prevent road crashes on highways, with iRAP included as the safety metric for road infrastructure.

The cooperation agreement was signed yesterday by federal executive bodies and civil society organizations, including iRAP, during the opening of the First International Seminar on Road Safety.

Deputy Minister of Infrastructure, Bruno Eustáquio, highlighted the efforts made in the last four years by the Ministry of Infrastructure (MInfra) to reduce bureaucracy in the transport sector and connect people and regions to the country’s development. He also emphasized the need to reduce road traffic deaths and injuries.

“With the sum of our agendas of reducing bureaucracy and digital transformation, we are going to change the behaviour of Brazilians in traffic,” he pointed out.

The cooperation agreement is aligned to the pillars of the National Plan for the Reduction of Traffic Deaths and Injuries (Pnatrans), which provides for a 50% reduction in the total number of deaths and serious injuries resulting from road crashes in the country by 2028.

It aims to coordinate the actions of the different road safety stakeholders to make roads safer and, consequently, reduce the risk of serious crashes.

Brazil’s presence on the international agenda was also highlighted by the national secretary of Traffic, Frederico Carneiro. “We are living in a context in which Brazil seeks to reach international groups such as the OECD [Organization for Economic Cooperation and Development], and in the area of traffic, specifically, WP1 and WP29, two important working groups that deal with the issue of road safety and the regulation of motor vehicles,” he specified. In the secretary’s opinion, for the country to gain international prominence, the first step is to show what has been done internally to avoid road traffic fatalities.

Sponsored by MInfra, through the National Traffic Department (Senatran), the 1st Seminar on Road Safety will run from 21 – 23 November. In the programme, lectures, panels and workshops will be presented by national and international traffic safety specialists, with the objective of promoting discussion on best practice, plans, challenges and advances to improve road safety in Brazil aligned to the UN Decade of Action for Road Safety 2021-2030.

“This is the biggest event ever held in Brazil in this area of road safety. An international event, which features renowned panellists, who will certainly bring innumerable contributions to the education of attendees,” concluded the deputy minister of MInfra.

The event is being broadcast on the MInfra YouTube channel with simultaneous English and Portuguese translation.