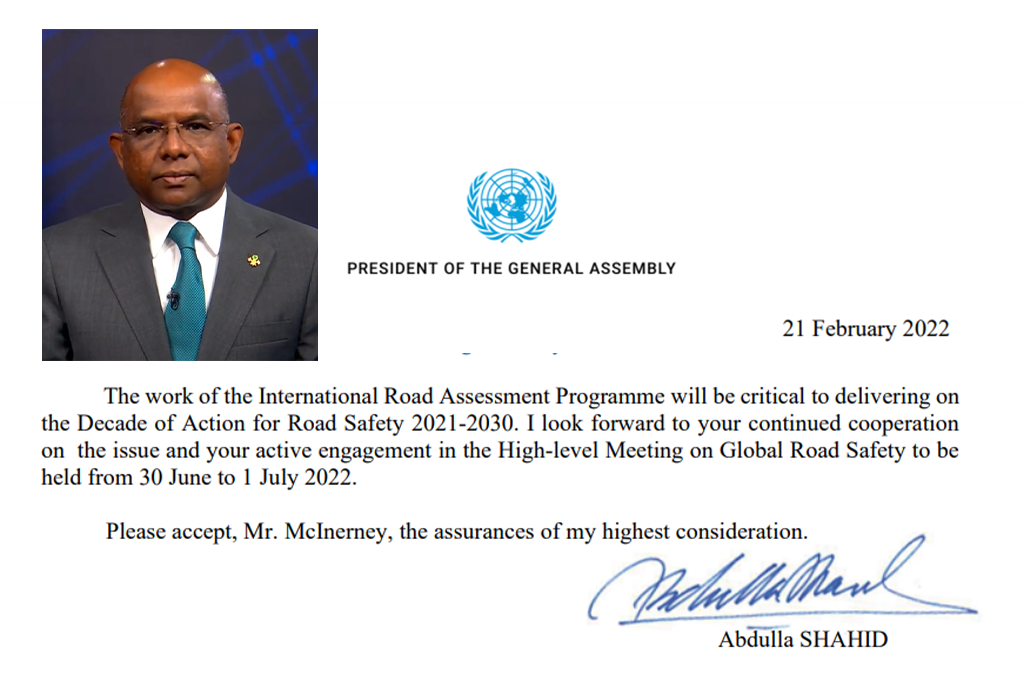 UN General Assembly President, Abdulla Shahid, has recognised iRAP’s critical role in the Decade of Action to 2030, outlined in a letter sent to the charity following the Supporting Event for the High-level Meeting on Road Safety in December 2021.

“The work of the International Road Assessment Programme will be critical to delivering on the 2nd Decade of Action for Road Safety 2021-2030,” the letter states. “I look forward to your continued cooperation on the issue and your active engagement in the High-level Meeting on Global Road Safety to be held from 30 June to 1 July 2022.”

iRAP is supporting more than 22,000 partners and governments as they draw on the Global Plan for the Decade of Action to develop and implement national and local action plans to eliminate high-risk roads.

In addition, iRAP has written to Heads of States in every country calling on them to actively participate, share success and commit to implement the Global Plan at the first ever UN High-level Meeting on Road Safety. On 30 June and 1 July, leaders from across the globe will gather at the United Nations in New York for the Meeting which is expected to result in a political decision to address gaps and challenges, mobilize political leadership, promote multi-sectoral and multi-stakeholder collaboration, and assess progress made in attaining the objectives of the road safety-related SDG targets.

iRAP is delighted that the valuable role of the charity has been recognised by President Shahid and looks forward to supporting all countries to make their roads and journeys safer in the global effort to halve road deaths and injuries by 2030.

iRAP has Special ECOSOC Consultative Status to the United Nations.