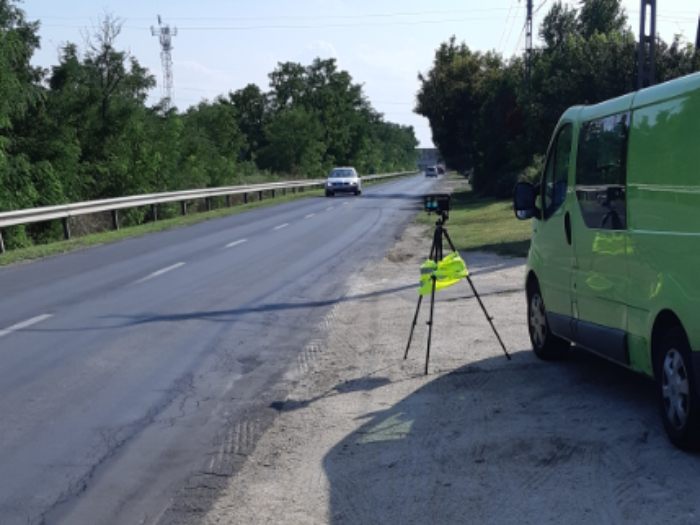 EuroRAP RADAR project partner, KTI Institute for Transport Sciences Non-profit Ltd., has successfully implemented a Pilot project in Hungary in the field of speed management. The aim of the Pilot was to examine the effects of vehicle activated speed warning signs and fixed-site speed cameras and to propose interventions based on the results. With the help of formulas on the relationship of speed and accident risk, the expected fall inroad accidents and injuries could be estimated at the two chosen pilot road sections.

After the identification of the most dangerous road sections of the I. class and II. class main roads in Hungary, the measurements were carried out at seven different locations. The locations varied according to their characteristics and also according to the measuring devices used. During the measurements, not only the road section in front of the devices but also the section behind the devices were examined.

Based on the results, the following data was calculated in both case when the device was operating and when it was not:

Significant effects on speed choice had been observed when speed signs and speed cameras were implemented. In the case of vehicle activated speed signs at all 5 locations, the average speeds and V85 speeds were lower when the device was operating (speed reduction varies from 0.5 km/h to 7 km/h).

In the case of fixed-site speed cameras, the average and V85 speeds were 6.5-8 km/h lower when the device was operating, while the ratio of speeding vehicles was also significantly lower in these cases. At the first location, the ratio of speeding vehicles at the line of the cameras dropped by 92.3 %, while at the other location the decline was 55.6 %.

Following the preliminary measurements and calculations, two pilot locations were chosen based on the potential for interventions to increase road safety. Both locations were on the list of the most dangerous road sections of the Hungarian road network.  Detailed road layout concept plans were also developed for the road sections, including the current traffic signs, speed limits, and the implementation points of the planned devices (vehicle activated speed sign or fixed speed camera).

By using the expected change in vehicle speeds (based on the previously introduced measurements) and the correlation between speed and accident risk (based on existing literature), the reduction in the number of road accidents and injuries could be estimated after the implementation of the devices.