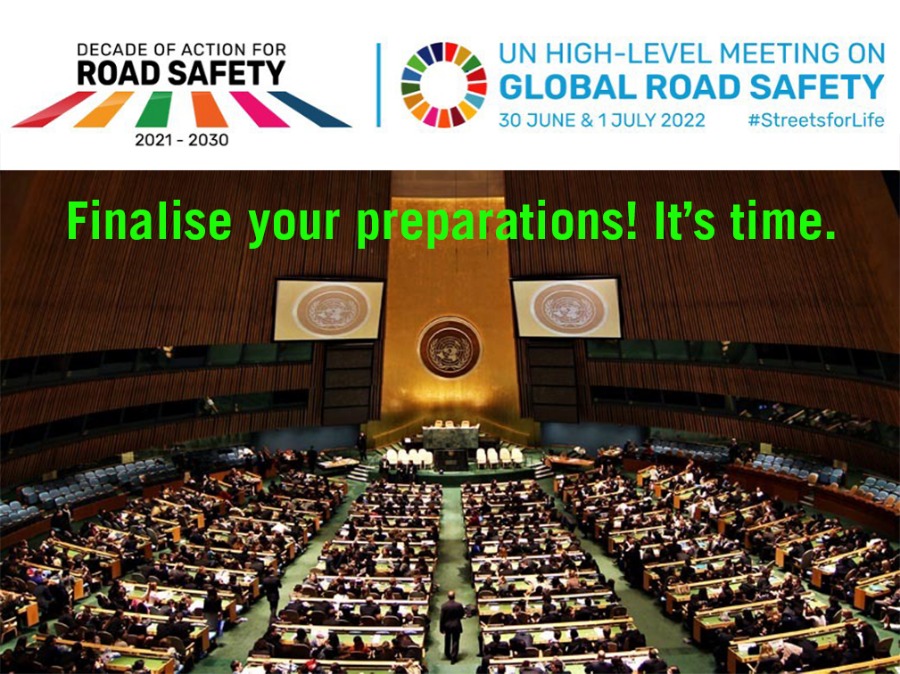 The UN High-level Meeting on Global Road Safety (HLM) is now just days away! Thank you to all our partners for your efforts to raise it to the attention of your President/Prime Minister and Ministers, and share your national success. Partner efforts are helping to ensure the elimination of high-risk roads is priortised in countries and globally as we secure a Decade of Action and Delivery.

Many questions have been received and we provide the following update to support your planning. Our thanks to the Global Alliance of NGOs for Road Safety for preparing much of this core information with some iRAP adaptation.

About the High-level Meeting

The High-level Meeting on Global Road Safety (HLM) will be held at the UN headquarters in New York on 30 June – 1 July 2022. Its theme will be The 2030 horizon for road safety: Securing a decade of action and delivery.

The HLM is organized under the leadership of the President of the UN General Assembly, to be attended by UN Member States’ Permanent Missions to the UN, Heads of State, and Ministers to push towards the achievement of the Decade of Action for Road Safety 2021–2030. Even if your Head of State or Minister is not attending in-person, they may have delegated to your country’s Mission in New York.

iRAP wrote to the Presidents and Prime Ministers of every country back in February to encourage them to actively participate in the Meeting, share their RAP success and implement the Global Plan for the Decade of Action 2021-2030. The letters were well received and circulated. Over 60 countries responded to share their plans and advocacy to ensure high-risk roads are prioritised at the highest level.
Download the iRAP letters here

Purpose of the HLM

The HLM will focus on addressing gaps and challenges, mobilizing political leadership, promoting multisectoral and multi-stakeholder collaboration, and assessing the progress made in attaining the objectives of the road safety-related targets of the 2030 Agenda for Sustainable Development.

Format of the HLM and Side Events

The opening segment of the meeting will comprise of statements by the President of the 76th Session of the UN General Assembly, the UN Secretary-General, the Director General of the World Health Organization and the UN Secretary-General’s Special Envoy for Road Safety. A general stakeholders’ segment will then be held with statements by Member States and observers of the General Assembly followed by panel discussions around specific themes and a brief closing session with concluding remarks by the President of the General Assembly. Find the program and side event information in the final WHO Press Briefing HERE.

Opportunities for action and advocacy

The most significant impact that RAP partners can have is to support your Ministers and delegations to participate, shape their presented Statement and guide them on the need, potential and next steps to eliminate high-risk roads in your country after the event. The best way partners can use the HLM for advocacy is by leveraging national progress toward the 2030 targets.

Here are some actions that you can take:

The HLM will be webcast live on UN Web TV HERE.

There have been no formal invitation letters as the UN Resolution 74/299 Improving Global Road Safety is the formal invitation to all Member States. The President of the UN General Assembly issued an official letter sent to all permanent missions to the UN, which you can read HERE.

You can find the contact information of all the Permanent Missions in the UN Blue Book HERE.

A special accreditation process for NGOs was conducted in May 2022. Applications for accreditation have now closed and successful applications will be notified. The list of NGOs and other civil society organizations that have been accredited can be found HERE.

Note that the meeting is primarily aimed at Member States’ permanent missions to the UN, Heads of State, and Ministers. To register the attendance of Heads of State and/or Ministerial delegations, you are advised to contact your country’s Permanent Mission and advise delegation names. The Mission will then submit the list via the UN e-Delegate system and passes will be issued. For visa application support, contact your Foreign Embassy.

Attendance is organized via the UN President of the General Assembly’s office and WHO. iRAP is not involved in the process or selection.

Check the link HERE to see if your organization is listed. Next steps should be listed in the email that you were sent regarding your accreditation. iRAP is not involved in the registration process and is therefore unable to provide visa support letters. We suggest that you contact the organizers via the email that you received regarding your accreditation.

There are no grants from iRAP to support partner attendance.

The HLM will comprise an opening segment, a plenary segment, up to three multi-stakeholder thematic panel discussions and a brief closing segment. The programme outline is available HERE..

Yes. The President of the General Assembly has led the preparation and negotiation of the Global Political Declaration. Read the political declaration that has now been approved and will be adopted at the opening session HERE. The strongest opportunities to influence policy and implementation are at national levels with your national governments, using the HLM to leverage.