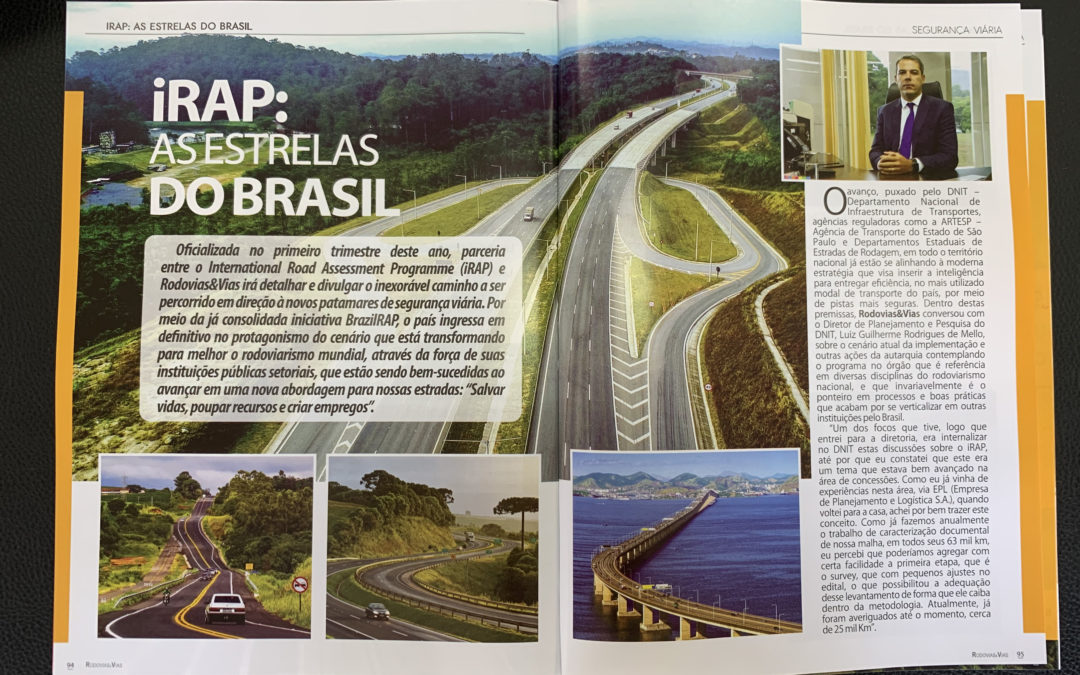 Download a copy of the issue here (in Portuguese) and see the article on pages 94-97, or download the iRAP section in English here

Launched in the first quarter of this year, a partnership between the International Road Assessment Programme (iRAP) and Rodovias&Vias will detail and publicize the inexorable path to be taken towards new levels of road security in Brazil. The country, through the already consolidated BrazilRAP initiative, is definitively progressing the scenario that is transforming the world highway system for the better, through the strength of its public sector institutions, which are successfully advancing a new approach for our roads: “Save lives, save resources and create jobs”.

The initiative, hosted by DNIT – National Department of Transportation Infrastructure and supported by regulatory agencies such as ARTESP – São Paulo State Transportation Agency and Brazil’s State Departments of Highways is already aligning with the modern strategy that aims to capitalize on intelligence to deliver efficiency, in the most used mode of transportation in the country, through safer lanes. Within these premises, Rodovias&Vias talked with the Director of Planning and Research of DNIT, Luiz Guilherme Rodrigues de Mello, about the current scenario of implementation and other actions of the programme in the agency that is a reference in several disciplines of national highways, and that invariably leads processes and good practices in other institutions throughout Brazil.

“As soon as I joined the board, one of the focuses I had was to internalize in DNIT these discussions about iRAP, because I realized that this was a topic that was well advanced in the area of concessions. As I had already come from experiences in this area, via EPL (Empresa de Planejamento e Logística S.A.), when I returned to the house, I thought it was a good idea to bring this concept. Since we already do the work of documentary characterization of our network, in all its 63,000 kms, I realized that we could add, with some ease, the first stage, which is the survey with minor adjustments to fit within the iRAP methodology. Currently, we have been verified for about 25,000 kms”.

“The methodological adoption allows post survey and post codification – a snapshot – so we can see the safety situation of each segment using a methodology used worldwide in more than 100 countries and on more than 1 million kms of roads. It’s something unprecedented, because for the first time, we will have a real notion, to establish a comparison of the Brazilian situation compared to other countries that also adopt the classification. It is inclusive, something that is unpublished in terms of Latin America. And in this context, it is important to emphasize that, independently of the obtained results, we will have good conditions to propose feasible goals. Going beyond, this ‘picture’, will allow us to prioritise the most prudent allocation of resources to save lives.

Technology provides us with what we call countermeasures, solutions to be implemented proactively, and of course, in accordance with our budget plan. They are the so-called ‘road vaccines’, in iRAP terminology”. With this, we will add intelligence to something that was previously purely reactive, which was the reading of the ‘heat map’ that DNIT got, based on the data of accidents that occurred in various regions of the country. Let’s get the most out of the vaccine for safer roads“.

“The DNIT had been practically, since its constitution, seeking a manner to add intelligence to the way its interventions were conducted in the networks under its care, naturally, due to the limited nature of its resources, which in recent years became more intense. At the same time, Brazil has made commitments to the ‘First Decade of Action for Traffic Safety’ proposed by the UN (2011 – 2020), and will certainly agree to the second, recently proposed by iRAP and adhered to resolution A/74/L.86, at the UN General Assembly, for 2021 – 2030. With this, we had several actions that showed tremendous potential to save lives, such as BR-Legal, which could have been even more effective if it had been implemented together with the methodology.

The proposition of this second decade, however, reaches the DNIT with very convenient timing, because with BR-Legal 2, and the improvements it has been implementing in the constructive part of its highways, it will be fully able to, in 10 years, present results within a globally accepted, recognized methodology. I have no doubt that this can even more positively influence our concession program by allowing external investors a very clear view of that asset. Finally, we are aligning the Department with good practices and towards a universalization of modern engineering concepts”.