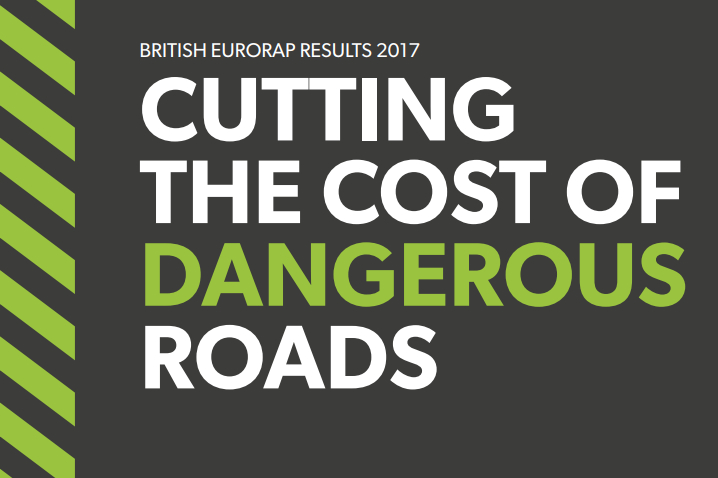 The Road Safety Foundation, in partnership with Ageas UK, has today launched an innovative interactive Road Crash Index alongwith its latest UK risk mapping and performance tracking report on the EuroRAP network of Motorways and A roads.

According to the report, Cutting the Cost of Dangerous Roads, the UK’s local authority A road network needs an immediate injection of £200 million to tackle the high risk road sections.

In a major innovation last year, the UK government allocated £175m Safer Roads Fund to tackle a portfolio of the 50 most dangerous local A roads in England – roads posing the highest risk of death and serious injury to users. These roads have been inspected, remedial proposals prepared and the first findings will be reported in 2018.

In total, a further 6,111 kilometres on more than 550 sections of unacceptably high risk roads, shown in red or black on Road Safety Foundation risk mapping, will need to be addressed by the Safer Roads Fund in the drive to bring road deaths towards zero.

For the first time, the Road Safety Foundation/Ageas UK partnership has launched the interactive Road Crash Index which shows the level of road safety improvement (or declining performance) in each county between 2010-12 and 2013-15. It shows a county ranking based on improvement, the cost of injury road crashes in each county and the cost per head of population, together with risk maps for each county and any improved or persistently higher risk roads. The interactive includes an opportunity to tweet or email relevant MPs to ask them to support road safety investment.

The report, Cutting the Cost of Dangerous Roads, identifies that on the EuroRAP network of Motorways and A roads (the 10% of the road network that contains half of all road deaths):

These findings are in a context of:

Highways England has set a clear long-term goal to bring the number of people killed or injured on its 6,883 km network as close as possible to zero by 2040. It has committed that, by the end of 2020, 90% of travel on the roads for which it has responsibility will be on roads with a 3-star safety rating or better. The report shows that:

The 2017 EuroRAP Risk Mapping and Performance Tracking results were launched today at the House of Lords in London.

iRAP CEO Rob McInerney said, “The UK is leading the way with the launch of its interactive data tool and in saving lives on its roads.”