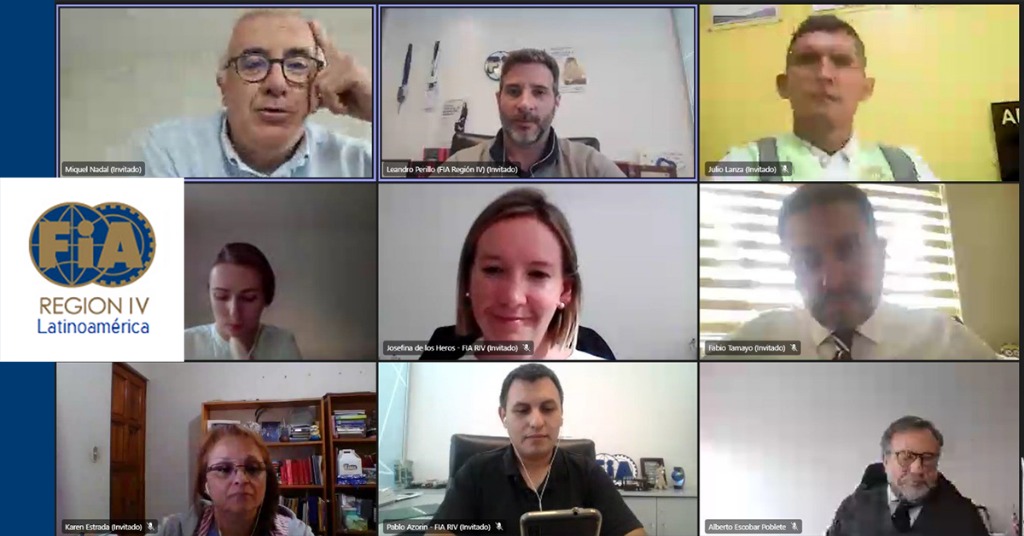 iRAP was proud to join an FIA Region IV and FIA Foundation workshop recently presenting iRAP programmes and tools and to define a working mechanism for mobility clubs in the region to work together to achieve a common agenda – making roads safer for all.

The workshop opened with presentations detailing the goals of the meeting. FIA Road Safety Programmes Manager Aleksandra Golovliova started by explaining the FIA’s mission is to accompany and support its Member Clubs and Regions in promoting and pursuing a global culture of safe mobility. She explained that road safety requires urgent attention in Latin America and highlighted the key role FIA Clubs have been playing in the region to raise awareness of that issue. Golovliova welcomed the fact that Clubs from Region IV are willing to become more involved in the FIA School Assessment Programme utilising the expertise developed by iRAP in its Star Rating for School (SR4S) methodology and encouraged more Clubs to join the 15 Members worldwide that have already started projects to make school zones safer. “Star Rating for Schools provides FIA Member Clubs with a great opportunity to leverage their credibility, reputation and expertise to continue to build and strengthen partnerships to increase the effectiveness and adoption of safe mobility programmes reinforcing the safe mobility culture,” she said.

The assertion was supported by FIA Foundation Programmes Manager Aggie Krasnolucka who explained that safety around 200 schools has been improved so far thanks to the SR4S methodology with impressive results. “This really saves lives”, she insisted. Krasnolucka emphasised the fact that iRAP is a key partner to work with when it comes to putting into place efficient and relevant measures to tackle the death toll on the road. “iRAP is present in more than 100 countries and thousands of engineers were trained to use its methodology, influencing billions of dollars in fund investment in turn,” she said. She then reiterated the FIA Foundation’s will to support Clubs’ initiatives to improve road safety, notably through the FIA Road Safety Grants Programme.

FIA Region IV Executive Director Josefina de los Heros then took the floor to shed light on the specific opportunities that using the SR4S methodology can bring to FIA Clubs in the region. “Assessing the safety of a school zone is the perfect way to start working with local authorities and Start Rating for Schools is a great tool to raise awareness of the road safety issue. Local work and progress can then become a national success and bring about a real transformation and more results when it comes to making the roads safer,” she said. De los Heros also highlighted the importance of making strategic alliances and the need for Region IV Clubs to join forces and work together. She then concluded saying that the FIA Region IV team will support its Members helping them adapt iRAP’s methodologies to their local conditions and realities.

iRAP Chief Executive Officer Rob McInerney further explained how iRAP can help FIA Clubs improve road safety. After reminding that the second Decade of Action offers a tremendous opportunity to drive effective change to save lives and money, McInerney talked about FIA Clubs’ missions. “The Auto Club is one of the main important voices for road users, your members, and the greatest member service you can offer is helping them get home safely every day. That is why the road safety leadership of the FIA, the FIA Foundation, and you, the national Club, is critical to help save lives. The road infrastructure safety request is simple: help make sure all new roads are built to that 3-star or better global standard for all road users and then measure the safety of the existing roads and progressively bring them up to that 3-star or better global standard as well,” he asserted. He then thanked the FIA Foundation for its support that has allowed iRAP to build and maintain a set of tools free for access enabling governments or private road owners to set evidence-based policy targets and invest with confidence. These tools encompass risk mapping, star ratings or investment planning and are available to all. McInerney highlighted three resources that can be particularly valuable to support FIA Members in their advocacy effort:

McInerney concluded by thanking the Automóvil Club del Ecuador (ANETA) for leading the way in establishing in its country the first ever iRAP-FIA Club and Google street view data collection – a concept that iRAP is looking to further expand regionally and globally.

iRAP Chairman Miquel Nadal concluded the introductory session by shedding light on iRAP’s main achievements, “iRAP has established a global standard for infrastructure safety and reliable and comprehensive tools that have saved thousands and thousands of lives and encouraged many governments to invest for safer roads,” he said. Talking about his experience of using the iRAP tools when he was working for the Reial Automóbil Club de Catalunya (RACC), Nadal explained: “iRAP offers three things: tools to learn and train, an efficient way to connect with authorities, and a great communication potential.” He insisted on the training opportunities offered by the Programme, “demonstrating accurate knowledge enables one to gain credibility and establish an informed conversation with authorities as the Club gains valid expertise on road safety,” he said. He capped off his presentation by talking about the role of the FIA as a facilitator encouraging FIA Members to work together.

After, iRAP Safer Journeys Regional Leader – Americas Edgar Zamora presented the main challenges and targets set by the Second Decade of Action for Road Safety, and the workshop moved on to a more operational content with iRAP Operations Lead for Latin America and the Caribbean Morgan Fletcher and iRAP Star Rating for Schools Global Coordinator Rafaela Machado respectively detailing the Star Ratings and the Star Rating for Schools methodologies. iRAP Training & Accreditation Coordinator Franco Azzato then explained the training and accreditation programme of iRAP.

Concrete examples of actions taken in Latin America were shared to promote the exchange of best practice and encourage more Clubs to put in place programmes capitalising on iRAP tools. Touring & Automóvil Club de Colombia General Director Alfredo Albornoz spoke about the successful implementation of the FIA School Assessment Programme and SR4S in Bogota, Colombia and highlighted how it has enabled the Club to establish a strong relationship with the local government and to increase its positive impact on road safety thanks to communication.

The private sector’s point of view was also expressed thanks to 3M Global Director of School Zones Victor Cabrera explaining how 3M partnered with iRAP to deploy its programme to make school zones safer in Asia and LATAM, and how this programme is complementing the work of local authorities that sometimes do not know how to intervene efficiently.

After discussions about the main challenges faced by FIA Members in their road safety advocacy work in the region moderated by Automobile Club of Chile Mobility and Public Policy Manager Alberto Escobar, FIA Region IV Mobility and Public Policy Manager Leandro Perillo wrapped up the meeting by summarising the key takeaways and proposing a plan to establish a joint working mechanism. FIA Region IV President Ricardo Morales Rubio gave the final word. He thanked all the participants and reminded them that the FIA Region IV team is available to help and accompany its Members in their actions to promote road safety.