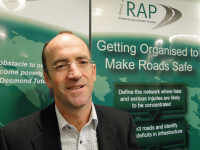 Steve Lawson’s work over 35 years includes research to reduce single-vehicle crashes and those involving young pedestrians, work on traffic cameras and red-light running, and supporting the development and application of protocols used by EuroRAP and iRAP.

AIRSO is a charity and independent membership organisation based in the United Kingdom and was established in 1965. The 50th anniversary awards were presented by Tim Stevenson OBE, Lord Lieutenant for Oxfordshire.